Oh, Disney snacks and drinks, how we miss you!!

Since the parks have been closed, we’ve been having some MAJOR withdrawal from all the amazing restaurants in Disney World. From simple Mickey Pretzels at the food carts to the HUGE Kitchen Sink at Beaches and Cream, Disney hands-down has some of the best treats to indulge in when you’re at the parks.

Buuut, that doesn’t mean they’re all hits! There are still snack and drink flops, even in the Most Magical Place on Earth.

Since menus switch things up so frequently, items come and go. And, while the eats and sips might be gone, they’re TOTALLY worth remembering as some of the biggest menu bombs in Disney World!

HEAR. US. OUT! Normally, something like this would be EVERYTHING to us. But the reason it bombed is NOT the one you THINK.. .

Y’all, it doesn’t matter how old we get… Pop-Tarts are STILL our jam. Whether you toast them, eat them plain (does anyone else refer to them as “raw” this way like we do?!), or freeze them, the sweet pastries are a great way to start your day or a fantastic midnight snack.

Even though we love Pop-Tarts, Disney’s Pop Century Resort rolled out a sandwich that was seriously so weird, we’re still not sure how to feel about it. 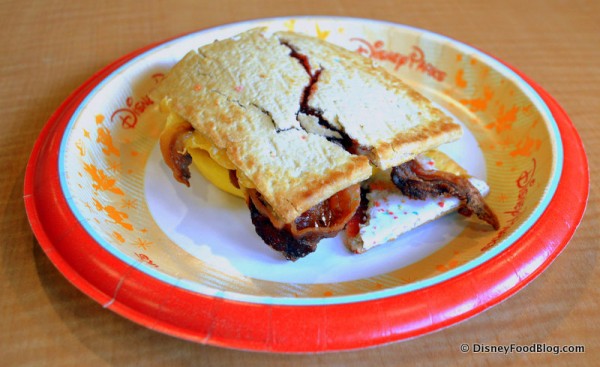 The breakfast sammie had some pretty regular morning eats like egg, bacon, and cheese. But, the ringer was that they were layered between two frosted strawberry Pop-Tarts.

⚠️Now we STAN an innovative food idea, so even though we were like whaaaaa?? we were still all in at this point.⚠️

The sandwich was toasted so the strawberry filling melted onto the rest of the ingredients as you took each bite. Strangely enough, though, it wasn’t the Pop-Tart that we didn’t like in this morning snack. The frosting and filling actually added a sweet twist to the savory ingredients. 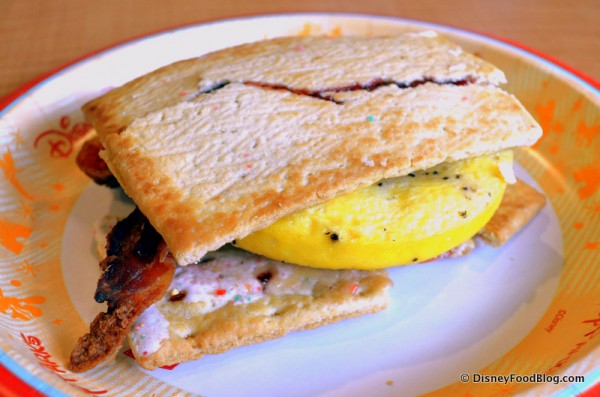 But the egg layered in between was like a flavorless patty instead of a fresh, fried egg. It had a slightly rubbery consistency, which did not fit with the yummy crunch of the bacon.

Plus, this thing was a HOT MESS to try and eat! Each bite seemed to make the Pop-Tarts collapse even more into a sticky mess of crumbles. 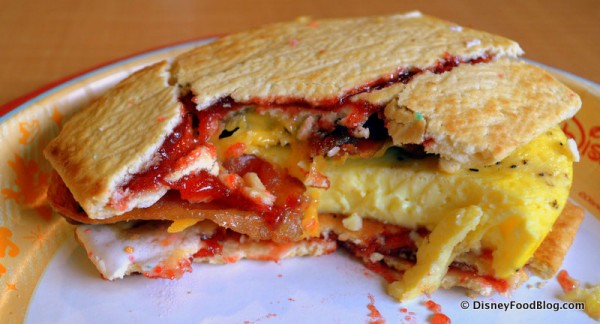 This was…UNIQUE! And like I said, we LOVE a creative food idea, so props to you Pop Century for adding yet another interesting idea to your men!

But we couldn’t get past that crazy egg. Let’s try a diff Pop Tart sammie next time — there’s potential there!

Read our full review of the unique Pop-Tart Sandwich here!

We are very, VERY big fans of Corn Dog Nuggets from Casey’s Corner (especially with lots and lots of plastic cheese!!). They’re practically a Magic Kingdom staple and a must-have if you’ve never grabbed them before.

But, things went totally awry last year when the hot dogs in the counter-service’s famous snack were switched for chicken for a short time. 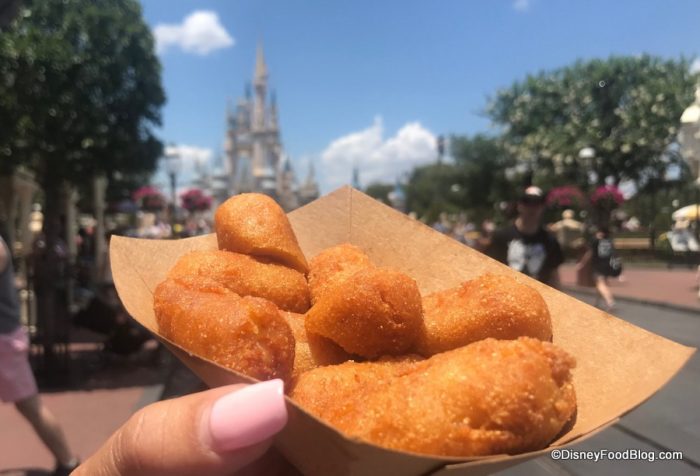 And, yes, it was just as weird as it sounds. The chicken flavor wasn’t horrible, but it was heavily overpowered by cornmeal so the flavors were off-balance. Plus, we don’t know about you, but biting into a yummy nugg and finding something white staring back at us instead of that familiar pink was…odd. Since there were a LOT of complaints about the change, the original Corn Dog Nuggs were soon reinstated (much to the relief of many fans). 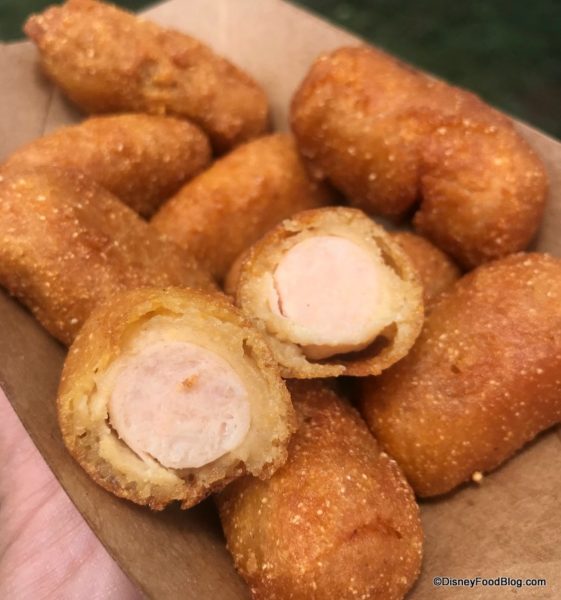 But, even though the chicken version is gone, we will never forget that fateful day that our nuggets were changed… .

Check out the Chicken Corn Dog Nuggets for yourself here!

The Epcot Festival of the Arts is one of our FAVORITE times of the year with food, drinks, and events inspired by visual and performing arts!

And, while we bring the Best of the Fest to you each year, last year’s festival had one of the WEIRDEST things we’ve had in Epcot. The Painted Panda in the China Pavilion had a Tomato Plum Cocktail as their signature sip that year, and BOY was it strange. 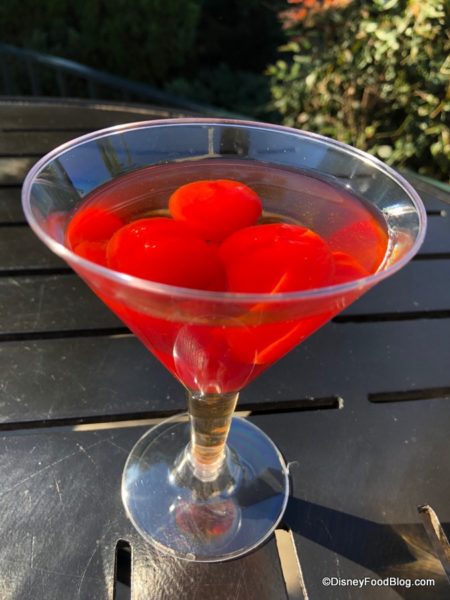 The plum wine had plum infused tomatoes floating in the drink (we did NOT know how to feel about tomatoes bobbing in our drink!). It kind of tasted like a red jolly rancher will all the plum wine, but the tomatoes inside gave it a SUPER weird texture.

The best way we can describe it is honestly like giant boba balls with slimy insides! 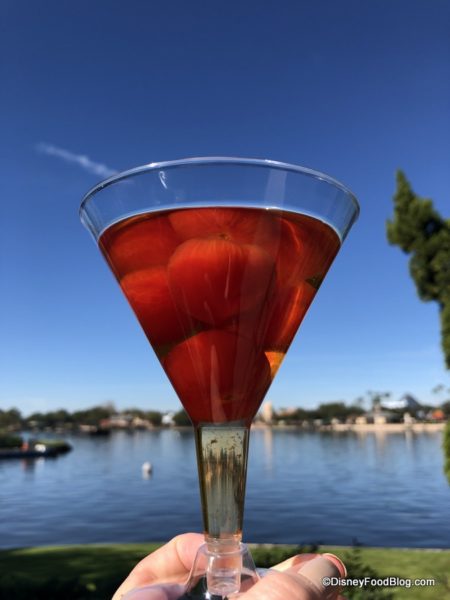 Thankfully, it didn’t come back for the 2020 festival’s booth, and it was switched for the MUCH more satisfying Sea Butterfly instead.

Sip the Tomato Plum Cocktail along with us at the Painted Panda!

La Cava del Tequila is a FANTASTIC spot to kick back and grab a few drinks while you are making your way around World Showcase. The bar in the Mexico Pavilion serves 100% agave tequila in its drinks and has even introduced sips made by celebrities like Neil Patrick Harris!

Although we usually LOVE the cocktails we get at La Cava, (and the queso. Our hearts belong to their queso!) there’s one infamous drink that we are sooo glad has disappeared from the parks. 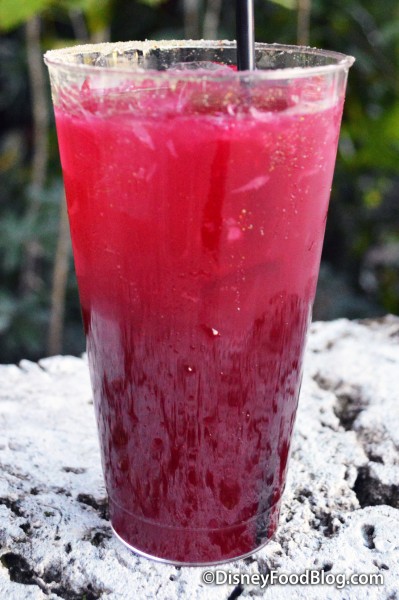 Back in 2016, the Beet Margarita (whose name should be just as daunting as it sounds) was introduced as a new drink on the menu. It was made with ginger liquor, fresh lime, agave nectar, agave tequila, and BEET JUICE.

And while a hint of beet juice may have been fine for color, it tasted like you were literally drinking liquid beets. 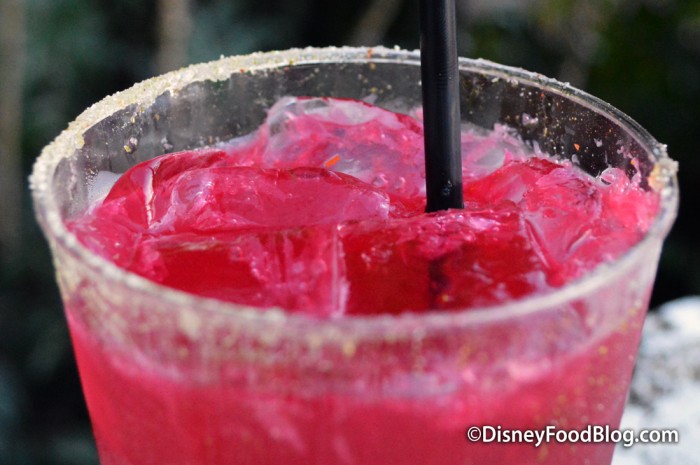 So, unless you’re Dwight Schrute, it was pretty unappealing to sip on compared to the other STUNNER margs and cocktails at La Cava. Other veggie margs have worked well (we’re looking at YOU Jalapeno and Avocado Margs) but we quickly shied away from the beet.

Take a peek at the very unusual Beet Margarita here!

Even though we weren’t the biggest fans of these eats and sips, there are SO many other amazing things to try in Disney World! But, some of the weirdest snacks can also be the best, so keep an open mind when it comes to tackling new things in the parks. You might find a REALLY unique new favorite!!

We’ve got the BEST things to eat in Disney World during 2020 here!

What are the worst snacks and drinks you’ve had in Disney World? Let us know in the comments below!