At Disney’s Investor Day conference today, we got to hear about new Star Wars series,  upcoming animated shows, and so much more coming to Disney+!

And while we’ve already seen a trailer for Marvel Studios’ WandaVision, today we got a NEW trailer for the Loki series coming to Disney+ and it is glorious!

We may not be able to head over to Avengers Campus to hang out with our favorite super heroes and villains just yet, but the Marvel characters are coming to us in some amazing new series releasing on Disney+ including Loki!

Marvel Studios’ Kevin Feige explained that in the series Loki is trapped in his own crime thriller, and noted that we shouldn’t worry if that sounds confusing and unusual as it appears Loki is just as confused. 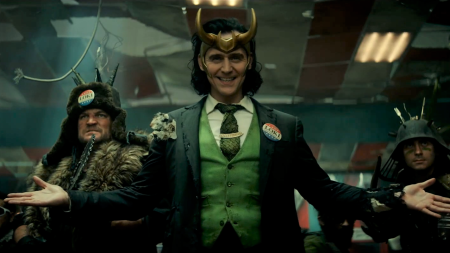 During the Investor Day conference today, we got an awesome trailer for the series showing more about the show (including a peek at Owen Wilson’s character) and some of the challenges that Loki will face. Check it out below!

Loki, an Original Series from Marvel Studios, is coming May 2021 to #DisneyPlus. @lokiofficial pic.twitter.com/gqT7AKur2y

Looks like Loki will be going on some intense, new adventures, and we can’t wait to go along with him! The series is set to premiere on Disney+ in May of 2021 and we’ll be on the lookout for more clips, sneak peeks, and other information about this series as its release date approaches!

THREE New Marvel Series will be coming to Disney+! Check out the details here.

« FOUR New Marvel Series Will Be Coming to Disney+!
NEWS: Star Wars ‘Rogue Squadron’ Film to Arrive in Theaters in 2023 »