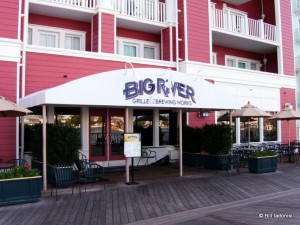 Here you can sample many different kinds of beers, along with great burgers, steaks, nachos, and more.

The floor-to-ceiling glass walls in the Big River Grille & Brewing Works restaurant provide a glimpse into the beer-making process. Watch while an on-site brew master crafts the establishment’s beers.

Located on Disney’s BoardWalk, this is a great spot for some late-night eats after a round of sing-a-longs at Jellyrolls, or hit this spot after watching the nighttime spectacular at EPCOT (Big River Grille is in walking distance from the park)!

Lots of varieties of beers and lagers, along with some casually fancy pub grub (try the Beer Cheese Soup!), including steaks, terrific burgers, and even flame-grilled meatloaf!